Last week, I was fortunate to be able to coach my son David’s 13-14 year old basketball team for Team Phoenix at the JCC Maccabi Games in St. Louis. I have coached my kids mostly in basketball, but also flag football and baseball, for over 13 years, totaling approximately 50 different teams and hundreds of games. But, this was my first Maccabi Tournament experience. It was a great experience traveling along with other coaches and a team of 50 athletes competing in various sports. I wish we had won more games; however, there was so much more to the Maccabi games then the competition.

As coaches, we were decked out in our team “swag” – t-shirts, long-sleeves, shorts, warm-up suits, gym bags, hats, etc. All the coaches from across the country stayed at the same hotel so we were able to socialize a bit in the evenings after the games and events. During the tournament, I noticed a basketball coach from Dallas’ 15-16 team. I liked the way he spoke to the kids and how he implemented new strategies during the course of the games.

On our last night at the hotel, the coaches brought down some of their swag to trade items with coaches from other teams who also have cool looking gear. I had already traded most of my gear for the night when I noticed the Dallas coach. I told him that I enjoyed watching him coach and thought he did a good job. Sometime later he came up to me and told me how much he appreciated my compliment and that it was very nice of me to go out of my way to do that. I thanked him for his kind words. 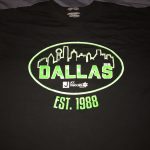 As I was leaving the lobby, I noticed another coach with an assortment of Dallas team gear. There was one t-shirt that caught my eye and he happened to have my size. I explained that all I had left to trade was my Team Phoenix shoe bag – not such a hot-selling item. He said he would have to ask his “Boss” and then turned around and waved down the same Dallas coach I had complimented earlier. When he saw it was me looking to trade, he said, “Please take the t-shirt and I don’t want anything in return, my pleasure.” I thanked him profusely for being so kind.

There is a lesson I learned here – it does not cost us anything to be complimentary to other people. So, why do we often find it hard to do? I felt good about complimenting him on his coaching, I felt even better when he told me how much he appreciated it, and I felt great when he offered me the t-shirt. I certainly never thought the conversation would unfold the way it did.

Let us all try to be more complimentary of others; it would sure make this world a better place for everyone.