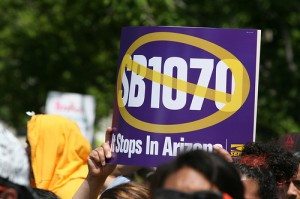 With Arizona having the second-longest border with Mexico, it is not surprising Arizona has been at the forefront of the national debate on immigration policy. Senate Bill 1070, requiring police to verify the immigration status of persons detained, also contributes to Arizona’s prominence in this area.

According to the federal Immigration Reform Control Act enacted in 1986, civil sanctions may be imposed against employers that hire undocumented workers. Under the federal law, employers must verify the immigration status of potential workers using the I-9 system, which allows employers to rely on certain types of authorized identification. The E-Verify system is still voluntary in most states except for federal contractors.