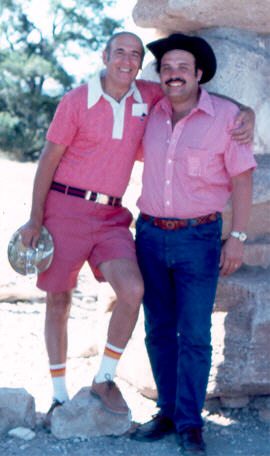 It has been 11 years since my father passed.  While his physical presence has denied me, I am reminded, literally every day, that he is not truly gone.  His wisdom, advice and jokes are with me still.

He was not a college educated man, not many were in his day, but had a wisdom born of street smarts, having grown up on the Lower East Side of New York in an immigrant family.  He had canniness and savvy of having been a businessman for 60 years.  As a young married man in the Great Depression, he had to provide by using his wits and by seizing opportunities.  “You are lucky to have an opportunity present; take advantage of it.”  He was a hard working man, for many years holding down two jobs.  I can’t remember a day when he missed work, even when he was ill (he suffered from ulcers). “I can be in pain at home or at work. The pain is the same, so why stay home when I am being paid to be at work…If you are being paid for a day’s labor, give your employer at least the value he deserves and if you want to get ahead, give even more. That is what makes this country great.”

He worked until his 80th year, not because he had to, but because he liked the feeling of contributing.  For quite a few of his last working years, he did so without compensation!  “If you are lucky you like what you do to make a living but every day that you get up and have a job to do, is a good day.”

I had the opportunity to work with him on weekends in my teen years and I was always impressed by the fact that he would whistle while he worked.  I remember fondly, the lunch breaks we would take.  We would go to a nearby grocer and buy fresh Italian bread, ¾ of a pound of corned beef and a couple of cokes, always in bottles, because you can see what you are getting.  More often than not, we would also enjoy corn muffins or apple turnovers (he was a connoisseur of both).  We would make up the sandwiches back at our workplace.  With great care he would spread the mustard on the long rolls making sure to cover the entire bread surface with the same precision as he taught me to stack cartons of goods from floor to ceiling.

“If you build up from a solid foundation you won’t have trouble or worry when you get to the top; this applies to everything in life.”  During one of our work sessions, he took the opportunity to explain the facts of life to me.  Despite my embarrassment, I was proud that he was seeing me as an adult at age 13.

It was from him that I learned my negotiation skills. Paying retail was frowned upon if not downright sacrilegious. “Always pay a fair amount but make sure that you are receiving equal or better value,” and “Never negotiate against yourself.”

He taught me to play Pinochle (a lost art) and how to maintain a poker face.  He taught me to parallel park and to shoot pool, both of which he maintained were geometric pursuits about understanding angles. I taught my kids the same way.  Speaking of my grown sons, I smile when I hear them espouse advice (particularly to my grandchildren) that echoes my father’s words which they obviously heard from me.  Of course, my sons think of it as original thought.

He treated women with the utmost respect.  He better not have caught me or any man telling an off color joke or using what he called “male language” in the presence of a woman.  The only licking I ever remember getting was when I called my sister a name, unbeknownst to me, in his hearing. He was a gentleman. He never told a story to top someone else.  “Don’t rain on his parade.” He cautioned never to use all your resources. “Keep something on the roof” figuratively speaking.  Why the roof? “Because it shouldn’t be easily accessible to tempt you to go all in.”

He loved a good joke, never letting it work too long and always nailing the punch line.  He always laughed at his own jokes, not matter how many times he had told them.  Henny Youngman[1], Jackie Mason, Jack Benny and Carl Reiner were some of his favorites.

He was a great listener and never offered advice unless specifically asked. Before he died, I asked him about being the patriarch of the extended family and how it was that he came to act and be accepted in that role. He said “It is not something you ask or campaign for, or even want. One day people decide to see you in that role and you do your best not to disappoint them.”  When in doubt, I ask myself “What would Dad do?” And so, he has not yet relinquished that role.

[1] A doctor gave a man six months to live. The man couldn’t pay his bill, so he gave him another six months.
My doctor grabbed me by the wallet and said, “Cough!
The Doctor called Mrs. Cohen saying, “Mrs. Cohen, your check came back.” Mrs. Cohen answered, “So did my arthritis!”
The Doctor says, “You’ll live to be 60!” “I AM 60!” “See, what did I tell you?”
A doctor says to a man, “You want to improve your love life? You need to get some exercise. Run ten miles a day.” Two weeks later, the man called the doctor. The doctor says, “How is your love life since you have been running?” “I don’t know, I’m 140 miles away!”