The journey of one thousand miles begins with a single step.
Chinese Proverb

The Goal.
More than seven and a half years ago I set a goal to complete a cycle of study of the 2,711 double-sided pages of the Babylonian Talmud, a compendium of Jewish law and lore capturing a tradition dating back to Moses at Sinai. Written in terse Hebrew and Aramaic, it is best not studied alone, even with the help of English translations. So I joined fellow learners in the Daf Yomi program (Daf = page; Yomi – daily). Over those seven and one-half years, I could always find a Daf Yomi group learning the same page as me whether I was in Arizona, New York or California. It became part of my daily routine and a frequent topic at our family dinner table.

The Process.
Each day, we learned one page. From the first volume (tractate) Berachot, dealing with the laws of blessings and prayers, through the laws and beauty of the Sabbath and holidays, to the order of damages dealing with subjects dear to a lawyer like ownership of personal property, bailments, dealings between partners, contracts and negligence. That the ancients had such a developed system of law was eye-opening. Then onto the relationships between men and women and the laws of marriage and divorce, sacrifices, the service in the Temple, dietary laws and the common and profane and contrasting holiness. 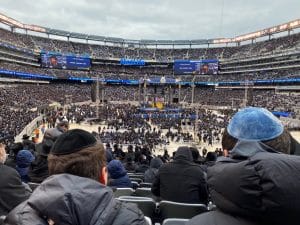 If I had simply considered the whole, the task would have been daunting, but taking it with fellow students, day-by-day, I was able to finish the project and cross it off my bucket list. Consistent effort and making it a routine were essential to completing the goal. Enlisting the help of others was certainly helpful.

The Payoff.
On New Year’s Day I and more than 93,000 gathered in Metlife Stadium, the  home of the New York Giants and Jets. Among the throng were  approximately 40,000 to 50,000 fellow “Dafers” who had competed the cycle with me. The view from my seat was awe inspiring. 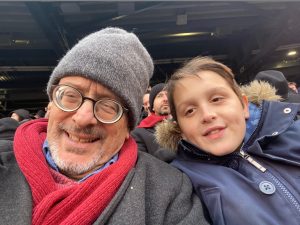 I brought along my son Noah, who completed six years of intensive Talmud study in Israel and has a Bachelor’s degree in Talmudic Law, and my grandsons, Ari Binyamin and Yehudah Mendel, who are just beginning to tip their toes into the sea of Talmud.  What a thrill it was to hear thousands of voices say “Amen” in unison. Behind our group from Phoenix were fellow students from Mexico and Panama, waving the flags of their countries. There was also a small delegation from Lublin, Poland where the Daf Yomi program started in 1923.

The highlight was the recitation of the “Hadran”, the traditional prayer when a student or group finishes a tractate. 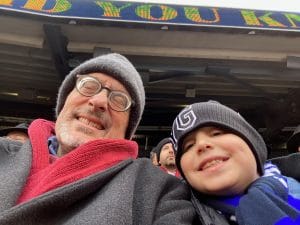 Thank you for letting me share this experience with you.

May it inspire you to set daunting goals that can be accomplished step-by-step.