As I approach a milestone birthday in the coming year, I feel more compelled to accomplish what I perceive as my “Bucket List” in life. One of my “list” items was attending a home football game of my favorite team – the New York Giants. Something I have always wanted to do. At the beginning of the season, I reviewed the home schedule and decided to attend the home game on Sunday, November 6. I wanted a typical home game in the morning against a divisional rival and settled on the game against the Philadelphia Eagles.

I planned to take our youngest son, David, as part of his post-Bar Mitzvah present. We were both very excited! As the game approached, we were informed that my cousin, who lives in New York, was planning a wedding for his son in early November (I held my breath). As it turned out, the wedding was scheduled for Monday, November 7 (sounds of me exhaling).

Now the Bucket List trip to the Giants game became a family trip to New York for the wedding that happened to have the Giants game sandwiched in between the ceremonial events. 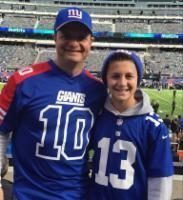 David and I went to the game and it was everything we hoped for — the Giants won, the game was exciting and we had a great time!

But I realized that without sharing the game with David, the experience would have been empty. And, in truth, the wedding was so much more memorable and fulfilling. This led me to conclude that my family, friends and people I care most about are my “Bucket” and doing things with them is actually satisfying my “Bucket List” by creating memories that will last a lifetime.

Here is wishing you a Happy Thanksgiving and may we all enjoy many more happy and healthy years to tackle our “Bucket List” of life!